On the fateful afternoon of April 8, 2017, yours truly was bored and decided he wanted to set up this hot new social networking software called Mastodon. Little did he know how this bit of idle curiosity would affect his life months later.

This is the story from then to now in pieces, as much as I can recall. I don’t remember every detail but what remains is enough.

Thanks Rob and Rachel

How did I find out about Mastodon in the first place? Well, I have narrowed it’s introduction down to two people I followed on my now deleted Twitter account: Rob and Rachel “thornyonmain” Kaye. I don’t recall the exact Twitter posts, those are lost to the endless screaming void that is Twitter at this point.

Setting up a Mastodon instance for myself was admittedly a tad bit difficult, made no easier by the production guide that was written in a haphazard manner with no sense of flow.

Through my own stubbornness and relying on my own experience as a sysadmin I managed to get an instance up and running. I used the sub-domain mastodon.zombocloud.com at the time because zombocloud.com is the domain I use for things that I think I’m not going to keep running for long (idle curiosity remember?). Oh boy, I was very wrong about that.

This is the first post I made on my brand new instance:

The first person I followed as I tried to find my way on this new network was the aforementioned Rob. My first two followers were Rey and Maffsie.

Starting with a single-user instance is what I would call Mastodon on Hard Mode, as you do not have a local timeline to start from so you have to slowly bootstrap from initial follows and boosts.

Not dissuaded by the slow start to my personal Mastodon instance, 10 days later I had an idea for a public instance that I wanted to set up and tenforward.social was born (Creation Date: 2017-04-14T18:04:56Z to be exact with the domain registration) with the admin account being called @guinan.

Now I was an admin of two separate Mastodon instances! As I was an admin, more of my personal timeline at this point started becoming posts by other instance admins as I tried to figured out the intricacies of running this piece of software.

Remember the time I put the list of suspended instances on Ten Forward as “Enemies of the Federation”? Oops. Yeah, that was a bit of roleplay that had unintended consequences.

Jeez, who wrote this?

Earlier in this post I mentioned that the Mastodon Production Guide at the time I set up my personal instance was not so great.

Fast forward to July 2017 and I was becoming increasingly frustrated at the state of the production guide and folks having trouble following it. So, I decided that I wanted to rewrite the whole damn thing with more structure and clarity. So I did.

You can find the current copy of it along with many other edits by other folks since then here.

I also wrote a few other pieces of documentation for the Mastodon documentation repository such as the Backups Guide and the Security Guide.

Oh, and a pull request to change the default of auto-playing GIFs to false.

Have you met the French witches? 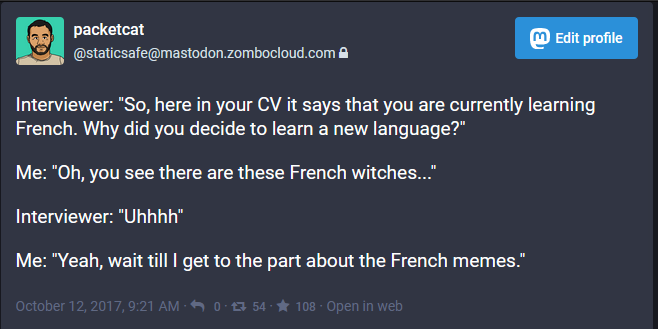 A woman is not forgotten as long as her name is still spoken.

Natalie’s passing in November affected many of us on Mastodon in various ways.

I don’t have much more to say here but I want to leave you with this bit from the track Luc(sic) Part 5 by Nujabes and Shing02:

whether a tree lives to see the end of centuries
or a random hand picks it instantly
life is art, a miracle for all to believe,
I must tell you that you lived beautifully

Having re-written the Production Guide, I felt like automating it with an Ansible playbook for deploying Mastodon. The project, started on November 24, 2017 is called Mastible. Mastodon + Ansible = Mastible. I might not be the most creative person in the world.

Most of the commits were made during a weekend where my primary home internet connection was down and I made the commit pushes and tests from a 3G dongle.

I had gotten the playbook in a finished state on November 27, 2017.

I am quite happy with the results of this project, it gave me the opportunity to advance my knowledge and experience with various Ansible concepts and provided me a way to deploy new Mastodon instances with little effort.

Reflecting on these past few months on Mastodon, the most important thing that Mastodon did to me is it tempered my cynicism. As I mentioned in my last blog post, I am more hopeful about the future these days.

Mastodon told me that social networking did not *have* to suck and I could help it not suck. Be the change you want to see in the world etc.

I have made new friends on Mastodon and strengthened my existing friendships. I have met people (hi beatrix and blackle!) from Mastodon IRL and I hope to do more of that in the future.

Mastodon’s future? I am no tech pundit so I will not make sweeping predictions about it’s future.

Mastodon the software has improved significantly since I first joined back in April of 2017 and shows no signs of slowing down. Mastodon is by no means perfect but as long as we keep striving to make it better we’ll be fine.

Thank you every one of you that contribute to Mastodon in any way. Thank you so very much.

I am gonna go back to boosting all the art I can find. I’ll see y’all on Mastodon.